Getting My Bavarian On

Barbara Engleder won gold for Germany in Rio yesterday in the women’s 50m rifle three positions event. After being declared winner, she went totally berserk, crashing to her knees, beating her chest, the ground and the air with her fists and hollering victory at the top of her lungs.

Although this exuberant display of emotion may have been a tad out of the ordinary for a German athlete, there was something even more striking about what happened next.


In the post-competition interview, in which Engleder explained her joyous outburst as the need to release the build-up of tension, she spoke in the broadest Bavarian imaginable. 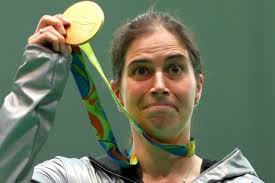 My mum was aghast during the entire news report, while I stared at the screen with bemused incredulity. We are both native Bavarian speakers, to be sure, but there is a widely held consensus across Germany that dialects are only to be used in informal situations, e.g. with friends and family, but NOT in formal settings like TV broadcasts or job interviews.

On such high-brow occasions, you are meant to speak Standard German (Hochdeutsch), which every German can understand. By switching to dialect "inappropriately", the speaker risks coming across as an uneducated, uncouth hillbilly*. Or worse, a farmer.

For the past few years, whenever I’m on a home visit, like I am right now, I make a concerted effort to stick to Bavarian as much as possible, even with strangers in shops and restaurants, as long as I think that they, too, are Bavarian.

I generally find that the reception to my speaking Bavarian is overwhelmingly positive, with most people replying in the dialect without raising an eyebrow.

If there’s one advantage to getting older, it’s that you care much less about what people think of you. So what if anyone takes me for a barn-raised redneck?

I’m really enjoying putting a conscious effort into expanding my Bavarian vocabulary. I’ve learned at least a dozen new words this summer already. My home village is a rich picking ground, and people of the older generation are particularly rich source of terminology, which is fast falling out of use. It pains me having to watch my very first language dying a slow death. (I did not start to speak Hochdeutsch until I went to kindergarten). But who knows, now that I have an Olympic gold medallist on my side, maybe there's still hope?

[Click here to listen to an interview with Barbara Engleder]