Recommended Reads: What Language Do I Dream In? By Elena Lappin

I love to read about multilingualism. It’s not so much the academic side, which intrigues me the most, but the personal account of the experience. What impact does living one's life in multiple languages have on a person's sense of self, on their relationships with others? What rewards and difficulties do people face as a consequence of moving within several cultures? Under what circumstances did they acquire their languages, and how do they keep them alive and vibrant?

Yesterday I finished reading What Language Do I dream In, by Elena Lappin, who speaks six languages (or more, I may have miscounted), five of which are central to her life. As a serial immigrant, she has lived in seven countries and currently resides in London.

Lappin speaks to her parents in Russian, to her brother (who's a German writer) in Czech and to her children in English and Hebrew. Her early attempts to raise her first son in Czech, which she had long considered “her” language because she spent a good chunk of her formative years in Czechoslovakia, failed, since family ties with the country had eroded over time. A mother tongue spoken only by the mother, it seems, is not enough to make it take firm root in a child.

In this evocative memoir, besides tracing her convoluted family history, the author describes her inner struggle with choosing the language she could finally realise her dream in: becoming a writer. In fact, which language to write in, rather than dream, becomes a personal as well as a professional quest.

Counter-intuitively, Lappin choses neither her first language and mother tongue, which is Russian, nor her beloved Czech, in which she says she has always felt truly at home, but English, the last language she learned to speak competently when she was already an adult. And although her story is as different from my own as could possibly be, I can very much relate to this part.

As an aside, the author represents someone I’ve referred to as a “Silver Spoon Multilingual” in a previous post. Funnily enough, one of the chapters of the book is entitled “Silver Spoon”. Her silver spoon, though, doesn't have much to do with her multilingualism, but concerns an actual silver spoon with an engraved name that she does not recognise at first sight, but which turns out to be a Russian version of her own name. 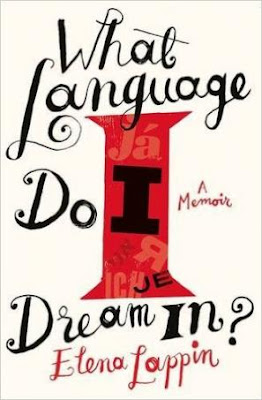 I think this is a fantastic read for everyone who's fascinated by the multifaceted reality of multilingual living, including its emotional dimension. The only part, which I perhaps didn't relish quite as much as the rest of the book was the last four chapters, in which the author goes into minute detail about her efforts to disentangle her complex family history. She doesn't manage to get me to care about these ancestral characters as much as she does about the still-living members of her family. On the other hand, her profound need to investigate her roots is precisely what gave rise to this great book in the first place, so fair dues.