Writing is Just So Damn Hard!

My Portuguese teacher despairs of me. "So, have you written anything this week...?" I look at my fingernails and shake my head. Nope. BUT, as I'm trying to point out to  her, I have done some 'homework' - I've been reading a novel, I've completed various exercises in my grammar & vocab book, I've listened to a couple of podcasts, I've been watching cartoons in Portuguese while having my lunch. I do realise that one lesson a week is not enough to advance my language skills and that I need to work at it a little bit every day. But... I just don't like writing.

"How can you NOT like writing? You write for a living!" She glares at me in stupefaction. I shift uncomfortably in my chair.

Yes, it's a paradox, I realise. In fact, I love writing. As long as I know what I'm doing. I don't like patching together a Frankenessay of words that just don't collocate, sloshing about in a sea of mutilated grammar. I don't like making mistakes, and what I like even less is having a written record of them. It's like being fat in your wedding photo.

I didn't really start writing in English until I was almost in my mid-twenties, when I had to compose my first ever academic essay. At that point, I'd already spent several years in an English-speaking country, in total immersion, reading, listening and speaking, and so I virtually no trouble producing a coherent piece of writing, more or less indistinguishable from something concocted by a native speaker. I'd had so much language input that, when it finally came to producing output, it all came completely naturally. I'd built up sufficient muscle over the years without even noticing or making a conscious effort. 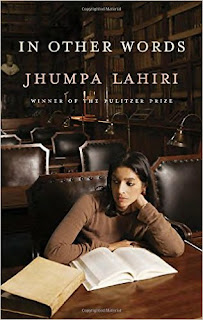 A little while ago, I read In Other Words, by Jhumpa Lahiri, an American writer of Indian heritage (the fact that she's bilingual and bicultural adds an intriguing twist, but I won't go into that right now). Lahiri is already an acclaimed writer (in English) when she moves from the US to Italy and starts writing in Italian, a language she's deeply passionate about. She's been studying Italian on and off for many years, but without ever becoming fluent. She's determined to finally conquer this language and she's doing a lot more than "just" living in Italy and keeping her diary in Italian - she's actually writing In Other Words entirely in Italian - a book destined for publication. So, she's fiddling about with dictionaries, she's having to write in the simplest of sentences, she's totally out of her depth. It's an excruciating process for her, like writing a letter blindfolded, with a pencil wedged between frost bitten toes. And of course, she needs to have everything proofread over and over again by native Italian writers.

She succeeds, evidently, overcoming her fears, limitations, frustrations and incompetence. And she does become fluent in Italian. Kudos to her.

Lahiri is not the only successful author to write in a non-native language, but I'm guessing that not many have attempted such a feat while their command of the language was still rather on the patchy side.

Do I feel at all inspired to follow her example? If only...