Every now and again, a dip in the bookshop's bargain bin can be like hitting the jackpot. I'm always on the lookout for books that capture the multilingual experience from a human point of view, and Franca Magnani's memoir, An Italian Family, which expresses the amusing and confusing realities of a multilingual upbringing, hits all the registers.

Magnani's witty, intelligent and warm writing style takes the reader back to a very fraught time in European history when adapting swiftly to new situations and environments was absolutely key to survival.

What do you mean, you've never heard of Franca Magnani?! Umm... join the club. Neither had I before I rescued said book from the cruel fate of ending up in the maws of the recycling plant. Turns out, Franca Magnani was a journalist, foreign correspondent and author who spoke Italian, French, German and English to a superb degree.

Multilingualism was foisted upon her in 1928, at the tender age of three, when she left her grandfather's house in an Umbrian village to go and live in Marseille with three perfect strangers: her mother, her father and her older sister. Franca's parents, as politically active anti-fascists, had been forced to flee into exile a few years earlier. They left Italy separately and were unable to carry a baby across the mountains on foot while evading border patrols.

After spending just enough time in the French school system to sound like her French playmates, Franca and her family were uprooted again, this time being granted political asylum in Switzerland. They ended up in Zürich, presenting a triple linguistic challenge: getting to grips with Swiss German, the Zürich dialect and, later on, standard High German. The latter differs significantly from the dialect of German spoken in Zürich and more subtly from Swiss German. 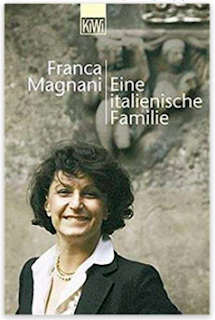 Franca's father, Fernando Schiavetti, an Italian intellectual and committed anti-fascist, was also a linguistic purist determined that his daughters would not babble away in "migrantish." Not only was he hell-bent on his family conversing in "proper" Italian, but their command of the languages spoken in their host countries had to be just as impeccable.

The family's evening meal was subject to frequent interruptions when the daughters were ordered to prise either the Zingarelli, the Larousse, or the Langenscheidt off the shelf to make sure that words were being used correctly. The outbreak of WW2 put an end to these dictionary-accompanied family chats across the dinner table. Instead, they all listened to French, British, Italian, Swiss and German radio stations to see how the same events were covered from different points of view.

And although five different languages were spoken by the girls, mixing different languages in the same sentence was a capital offence in the Schiavetti household, punishable by a wallop on the back of the head (never a slap across the face, that was considered demeaning).

Hitting children on the head may have fallen out of fashion, and so has the view that code switching (mixing languages) demonstrates a lack of linguistic proficiency, but Daddy Schiavetti's dedication to the multilingual cause has to be applauded.


Here's another Recommended Read:
What Language Do I Dream In? by Elena Lappin


...and here's why excruciatingly bad books can still be great for language learning:
Why Terrible Books Can Be Terrible Useful